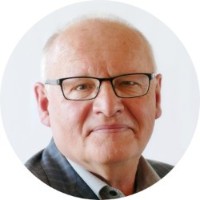 Keith was raised on a mixed farm in Gnadenthal, Manitoba. From the windows of the two-room schoolhouse he attended, he would monitor activity on the fields and knew he wanted to own his own farm. After completing his diploma in agriculture from the University of Manitoba, he and his siblings bought into the family-owned business, Southern Manitoba Potato Co. Ltd. Keith moved into management of the company and became president and CEO in 2000. Today, he owns Southern Potato with his two sons and daughter who manage day-to-day operations.